One myth of our times is that official history is – or even can be – objective and true.  Inconvenient facts are routinely suppressed, trivialized or ignored in official histories.  So much of what passes for “history” is propaganda, even crude propaganda.  The late Dr. Harry Elmer Barnes told his students and readers of the need for bringing history into accord with the facts.  That is the purpose of true historical revisionism: to make historiography objective, factual and true.  We must critically examine what currently is claimed as history to verify its veracity or lack thereof.

In this essay, we offer a number of links to well researched and thought provoking articles on some hot button historical issues.  The reader can choose what to read and what not to read.  As well, each individual will have to decide for him or herself what is the truth.  A discussion about whether humans…

[It’s pretty short, so I will paste this entry from the National Vanguard on its entirety. Now, don’t you think that it’s a bit strange that almost EVERY important person, or person of relevance had bad views on the jews…? Like, the jews are universally reviled by a lot of people from every walk of life. Really.]

“Every coward is a liar; Jews for example, not only in business, but also in common life.” Source

“The Jews still cannot claim any true genius, any truly great man. All their talents and skills revolve around stratagems and low cunning…They are a nation of swindlers.” Source

The Jews are by nature “sharp dealers” who are “bound together by superstition.” Their “immoral and vile” behavior in commerce shows that they “do not aspire to civic virtue,” for “the spirit of usury holds sway amongst them.” They are “a nation of swindlers” who benefit only “from deceiving their host’s culture.” Source

“The Palestinians [Jews thought to have originated in Palestine] living among us have, for the most part, earned a not unfounded reputation for being cheaters, because of their spirit of usury since their exile. Certainly, it seems strange to conceive of a nation of cheaters; but it is just as odd to think of a nation of merchants, the great majority of whom, bound by an ancient superstition that is recognized by the State they live in, seek no civil dignity and try to make up for this loss by the advantage of duping the people among whom they find refuge, and even one another. The situation could not be otherwise, given a whole nation of merchants, as non-productive members of society (for example, the Jews in Poland). So their constitution, which is sanctioned by ancient precepts and even by the people among whom they live (since we have certain sacred writings in common with them), cannot consistently be abolished — even though the supreme principle of their morality in trading with us is “Let the buyer beware.” I shall not engage in the futile undertaking of lecturing to these people, in terms of morality, about cheating and honesty. Instead, I shall present my conjectures about the origin of this peculiar constitution (the constitution, namely, of a nation of merchants).” [Quoted in Immanuel Kant, Anthropology from a Pragmatic Point of View, tr. Mary J. Gregor (The Hague: Martinus Nijhoff, 1974), p. 77.] Source

Sources from the article show the different quotes. This article comes from… The Residenz (German:[ʁesiˈdɛnts], Residence) in central Munich is the former royal palace of the Wittelsbachmonarchs of Bavaria. The Residenz is the largest city palace in Germany and is today open to visitors for its architecture, room decorations, and displays from the former royal collections. 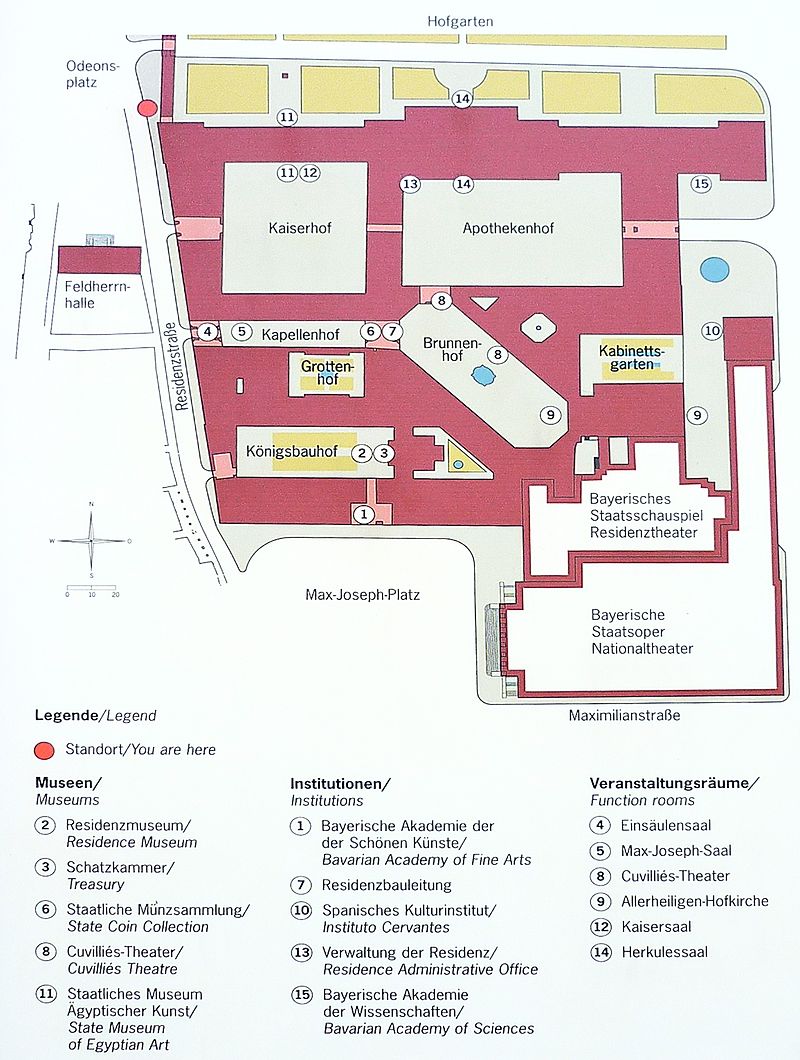 The complex of buildings contains ten courtyards and displays 130 rooms. The three main parts are the Königsbau (near the Max-Joseph-Platz), the Alte Residenz (Old Residenz; towards the Residenzstraße) and the Festsaalbau (towards the Hofgarten). A wing of the Festsaalbau contains the Cuvilliés Theatre since the reconstruction of the Residenz after World War II. It also houses the Herkulessaal (Hercules Hall), the primary concert venue for the Bavarian Radio Symphony Orchestra. The Byzantine Court Church of All Saints (Allerheiligen-Hofkirche) at the east side is facing the Marstall, the building for the former…